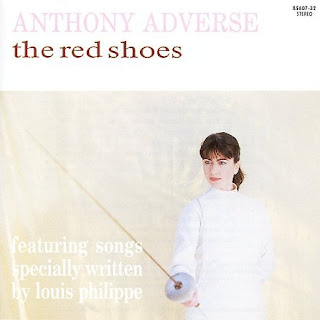 "It didn't last long. In seconds this moment had gone. It happened in Green Park ..." claims Anthony Adverse in her song Green Park. Oh I know the feeling only too well. This 'legendary b-side' was written by our old friend Louis Philippe, as was the Red Shoes suite of songs which features another fantastic Anthony Adverse London song, London My Town, which sounds rather wonderfully like the blueprint for Saint Etienne or Noonday Underground. It should perhaps be mentioned in passing that Anthony Adverse also recorded one of my favourite Vic Godard covers (T.R.O.U.B.L.E). The Anthony Adverse character was one of Mike Alway's fantasy pop figures on the wonderful el label and it's all there - the Powell/Pressburger references, the bossa inflections, the brassy '60s swing. I rather liked the fact that I didn't have a clue about who Anthony Adverse really was. Then, damn the internet, I found some snippets of information suggesting she was Julia Gilbert who had been in underground pop greats Five Or Six and who went on to become a script writer for EastEnders with a father who might have been Head of BBC Light Entertainment during one of its golden ages. Even Mr Alway couldn't have made that one up.
Posted by Yr Heartout at Saturday, May 15, 2010