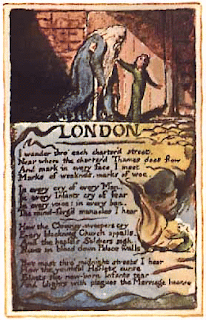 "The rain of London pimples/The ebony street with white/And the neon lamps of London/
Stain the canals of night/And the park becomes a jungle/In the alchemy of night ..." That's how Louis MacNeice's poem London Rain begins. There's a lovely bit in Arnold Wesker's East End trilogy where the young romantic revolutionary recites a few lines of MacNeice's and his mum says something along the lines of aww that's nice why don't you write poetry like that more often? Jah Wobble set London Rain to music on his collection The Celtic Poets. Jean-Pierre Rasle plays the pipes on this track and the words are read by The Dubliners' Ronnie Drew in that remarkable, distinctive voice. This is not the only occasion when Wobble has provided us with musical settings of poetic works. He recorded a set inspired by Blake's verse, which appropriately featured an adaptation of the poem London from Songs of Experience. Back in 1969 Allen Ginsberg recorded poems from Songs Of Innocence and Songs Of Experience, including London sung in his unique way, with musical contributions from some of the greats like Don Cherry, Elvin Jones, and Bob Dorough. A more recent and very lovely interpretation is by Paul Howard and Jo Clack ...