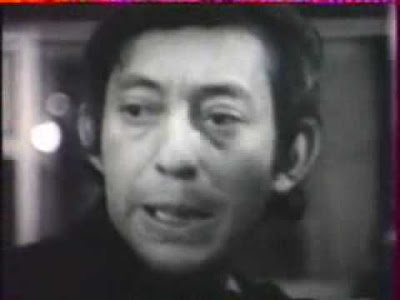 "Une nuit que j'etais a me morfondre dans quelque pub anglais du coeur de Londres parcourant L'Amour Monstre de Pauwels me vint une vision dans l'eau de Seltz ..." recounts Serge Gainsbourg at the start of his wonderful Initials BB. Happens to me all the time. There is a case to be made for more London songs to be delivered in anything but the local vernacular. After all a song starting: "One night as I was sitting moping in some pub in the centre of London reading a bit of Louis Pauwels I saw a vision in my tonic water ..." just doesn't have quite the same charm does it? Initials BB like several of Serge's greatest moments was recorded in London, where he worked with some of the great arrangers like Arthur Greenslade and David Whitaker. He also recorded his big hit with Jane Birkin in London. Indeed one of the tracks from that LP, Le Canari Est Sur Le Balcon, is set in London. I have to confess I nearly overlooked Initials BB as a London song, but since the mid-'90s re-serge-ence of interest in the great man's works they have become so familiar you almost don't notice the words for the sound they make - if that makes sense. Was it more fun when we had to scratch around for bits of Serge? Perhaps. But the joy of finding clips about the creation of Initials BB is still something wonderful. This is the second part ..."Here we go mate ..."