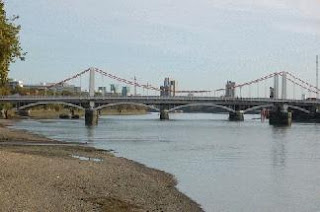 "Was it an hour since I ran to the stop to catch my 91? I don't mind the rain in my neck. It's all part of the season's fun ..." Ah. Louis Philippe again. We may need to ration his appearances here. But he does have a way with London songs. Lazy English Sun, for example, deals with the perils of leaving your umbrella on the 91 bus given the unpredictability of the English summer. And then there's Chelsea Bridge, a particular favourite. The bridge? Well, yes, in a way. But I really meant the song. A vocal and piano treat, and hommage to the French vocalese jazz tradition. It would be Louis' sleevenotes to the reissue of his Rainfall set that got me interested in Les Double Six, the Parissienne vocal ensemble that featured Christiane Legrand and Ward Swingle. So Louis has earned his frequent appearances here.