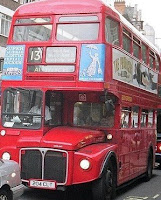 "Bus number 13. Destination Leicester Place." Heading Up West. A lovely song from Louis Philippe. I wonder how many people have rushed out to buy a Louis Philippe record after seeing his words used by Jonathan Coe as an epigraph for What A Carve Up! Some years after that book was published Louis and Jonathan would get to make a record together for Bertrand Burgalat's Tricatel imprint. Jonathan would write about how he "stumbled upon el records. Britain's great musical secret of the 1980s, home to Bid and Marden Hill and The King of Luxembourg and a cluster of other acts who proved that pop songs could still be written with style and feeling and classical elegance." Classical elegance is a phrase that certainly fits Louis' work. And it just so happens he's written some great songs about London, including the melancholy Bus number 13.
Posted by Yr Heartout at Saturday, July 11, 2009