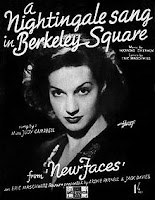 "Mayfair faces clean and nice. But beauty here is cold as ice ..." Mayfair is known for being exclusive and expensive. But like any part of the West End it's a right old mixture. Playboys and heiresses pass by the shop girls and office juniors sitting eating their lunches, dreaming away. A strange place according to Nick Drake's Mayfair, here sung with far more verve by Millie. And yes you can imagine civil servants straight out of a Graham Greene or Stevie Smith novel sitting on a bench in one of Mayfair's squares, plotting mischief. The most famous of these is captured in the standard A Nightingale Sang In Berkeley Square. You might imagine that number to be excluded. And yet the opening lines, written by Eric Maschwitz, are so often left unsung. "When true lovers meet in Mayfair, so the legends tell, song birds sing, winter turns to spring. Every winding street in Mayfair falls beneath the spell ..." Vera Lynn's early version is one of the complete renditions. The song itself was first sung by Jane Birkin's mother Judy Campbell in the 1940 revue New Faces.
Posted by Yr Heartout at Saturday, July 18, 2009