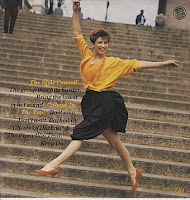 "I hear the whispers in the Soho cafes. The poison gossip of the 10p arcades ..." What is it with songs about the 'Dilly? We could have Ram John Holder's Piccadilly Circus Blues. Or Tracey Thorn's By Piccadilly Station I Sat Down And Wept. And of course It's A Long Way To Tipperary. But instead let's go for a lost Style Council flipside The Piccadilly Trail. Paul rather nicely turns Piccadilly trail into Cockney rhyming slang for betrayal. He would resurrect the song in the early days of the Paul Weller Movement during one of his better coiffure phases.
Posted by Yr Heartout at Tuesday, July 14, 2009