West One (Shine On Me) 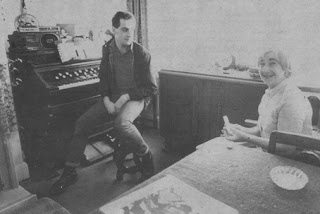 "Out in the dark and on my own. I'm stranded here with no way home ..." This picture of Ruts singer Malcolm Owen with his mum was published a short while before his tragic, wasteful early death. The song West One (Shine On Me) would be completed after Malcolm had passed away, and would be the group's final hit. As with a lot of The Ruts' material, beneath the bluster and gruff exterior, there was in this song a strong streak of vulnerability and helplessness. The dark side of London's West End with people perhaps trying too hard to enjoy themselves. The Ruts themselves were like the West End full of contradictions. Punk revisionists perhaps take The Ruts' roar at face value, but John King's tribute paints a contrary picture.