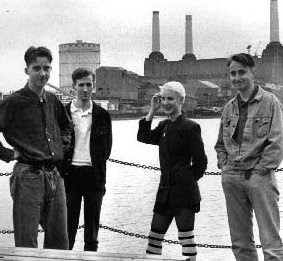 "Oh-ho-ho, Bermondsey, that's home to me. I'm longin' for the moment when I shall see the 'appy, laughing razor-slashed faces of the people I love ..." Cor! Until the end of the '80s when you'd get the train out of London Bridge you just might catch the scent of biscuits being mass produced driftin' from the Peek Frean's factory in Bermondsey which The Siddeleys' Johnny Johnson sang about in My Favourite Wet Wednesday Afternoon. Jumping on Johnny Johnson's bandwagon Sid James also sang a less than flattering but equally wonderful ode to Bermondsey in the 1964 film Three Hats For Lisa, with support from co-stars including Joe Brown and Una Stubbs. Mind you, it was Joe's fellow coffee bar rocker Tommy Steele who was known as the Bermondsey Boy, and had some songs written for him by Lionel Bart and someone whose son might have ended up in Speedball, including Rock With The Caveman which the Polecats did a neat version of ...