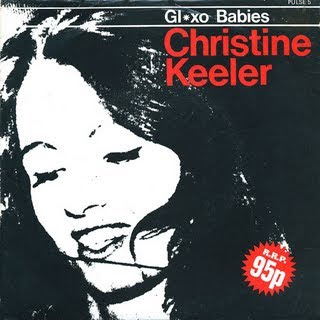 "And even though it's underhand Christine Keeler has got it planned. Christine Keeler understands ..." The Glaxo Babies' Christine Keeler pays tribute to one of the enduring figures of London legend. Play thought association with Christine's name and you'll come up with the Profumo Affair, Soho hospitality, Lewis Morley's photograph and that chair. But for the Glaxo Babies the appeal was the way for all the firebrands and revolutionaries that have passed through London it's Christine the showgirl that has succeeded in bringing down a Conservative government. So it's only right she has been celebrated in song by the greats such as Phil Ochs, Kinks, Skatalites, as well as in Nothing's Been Proved, the collaboration between Dusty Springfield and the Pet Shop Boys, which was the theme to the 1989 film Scandal in which Joanne Whalley memorably starred as Christine.
Posted by Yr Heartout at Tuesday, October 06, 2009