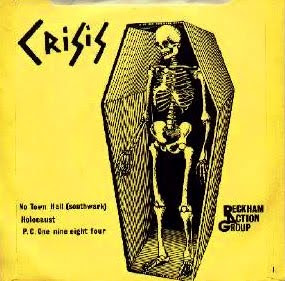 "You do the work. They get the loot. The men with the smiles and the three-piece suits ..." Look at any local paper in London and there will be any number of local campaigns on the go. Save this emergency unit. Save that day centre. Stop that school being closed. Fight those supermarket plans. But how many of these campaigns get captured in song. Crisis' No Town Hall is an exception from 1979. The fight locally was to stop plans to move Southwark town hall in Peckham at a ridiculous cost when money would be better spent on local housing. "We want homes, homes for all ..." Look too deeply into the story of Crisis and you'll get embroiled in the whys-and-wherefores of extreme politics and be none the wiser. This was a fantastic single though. And a major issue locally at the time, with questions in Parliament and the works.
Posted by Yr Heartout at Thursday, October 01, 2009