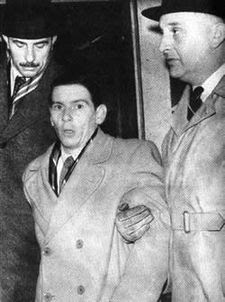 " A thousand lags were cursing. And a banging on the doors. But Evans couldn't hear them. He was deaf forever more ..." Everyone knows the name of Ewan MacColl but he is not that often heard. His songs are known by millions, but when was the last time you heard him sing? His ballad Go Down Ye Murderers sung here with Peggy Seeger is as chilling as the more famous film about the same story, 10 Rillington Place. MacColl's song tells the tale of Timothy Evans, who in 1950 was hanged for the murder of his infant daughter in Notting Hill. It became a celebrated cause, and was one of the miscarriages of justice that contributed to the abandonment of the death penalty. Evans was granted a posthumous pardon when it emerged serial killer John Christie was guilty of the crime.