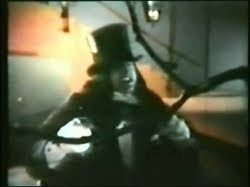 "There's a man who walks the streets of London late at night. With a little black bag that's oh-so-tight ..." Ah we're going to go all touristy on you now. The eternal fascination people have with the darker sides of London history. Paying good money to go on walks around London's east end following the footsteps of the infamous Jack The Ripper. Odd. Jack has been mentioned in song by a variety of folks, from Morrissey to Motorhead to LL Cool J to Nick Cave. But Screaming Lord Sutch made a bit of a career out of old Jack. This clip is a glorious Scopitone, which is where life really does get interesting. Scopitones were pop films made for early video jukebox type things, and YouTube is a treasure trove of wonderfully weird Scopitones, as is the excellent Bedazzled! blog. Far more fun than traipsing 'round the east end's dark alleyways.