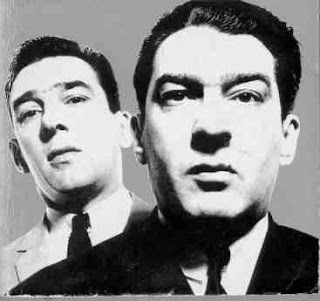 "East End will rise for the '60s and the spices ..." Ah the eternal fascination of the Kray Twins. Organised crime and vicarious glamour. A code of honour and a reign of terror. Brushing shoulders with celebrities and wiping out gangland enemies. East End fights and West End lights. The legends linger. The Mo-Dettes' Kray Twins is one take on the theme. But Renegade Soundwave's debut outing Kray Twins is the one that captures the brothers' mesmeric malevolence. There was always something splendidly sinister about RSW, and a sense that they wouldn't be against a bit of skulduggery. "I'm much obliged boys ..." Remember Probably A Robbery?