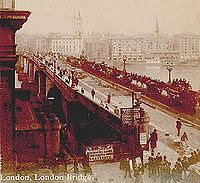 "And London Bridge is in the wrong place ..." The one that's in Arizona? The current London Bridge which was built in the early '70s? I suspect that line in Animals That Swim's London Bridge refers to Rennie's 19th century construction which I believe was built a little way upstream from where the old medieval bridge stood. I have to confess to being a relatively recent convert to the delights of Animals That Swim (thanks Alistair!). I completely missed them in the 1990s. There were many groups I studiously ignored in the 1990s. But I wasn't even aware Animals That Swim existed. My loss. They made some fantastic recordings, and there was a pungent London flavour to their work. The Tindersticks, on the other hand, was one of the groups I consciously avoided. My loss?