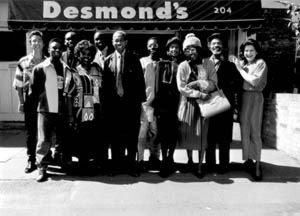 "So you sometimes go out in the afternoon. Spend an hour with your lover in his bedroom. Hearing old women rolling trolleys down the road. Back to Lyndhurst Grove ..." Peckham has been the location for some great comedy moments. Situation comedy greats like Desmond's and Only Fools And Horses have been set there. Interestingly both series were aspirational in terms of their characters. And their creators gave us some memorable characters, such as Ram John Holder as Porkpie, and Rodney Trotter who memorably appeared in a UK Decay t-shirt. I have no idea if whoever cast Nicholas Lyndhurst as Rodney realised he had a name with such Peckham SE15 resonances. Look in your A-Z. Another passing Peckham aspirant sang about the goings-on at 59 Lyndhurst Grove, SE15, though to me such preciseness seems most un-London like.