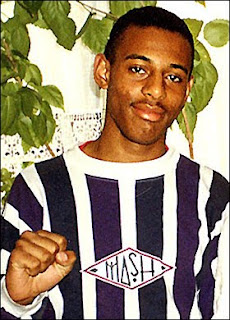 "Canteen culture colouring the view. From Hendon to Eltham. Not following the clue ..." sings Asian Dub Foundation on its track Officer XX. It's a day for remembering those that have died too young, so let's reflect on the murder of black teenager Stephen Lawrence who was killed in a cowardly racist attack while waiting for a bus in Eltham on the night of 22 April 1993. No one has to date been convicted for the killing, despite even the Daily Mail running front pages naming those commonly believed to be the murderers. And, as the ADF song refers to, the subsequent Metropolitan Police investigation was marred by allegations of corruption and racism, which led to a public inquiry and the now famous MacPherson report which condemned the Met as 'institutionally racist' and proposed far reaching changes. The murder of Stephen Lawrence is also mentioned in the brilliant Fearless by south London rapper Blak Twang, and in a moving poem by Benjamin Zephaniah called What Stephen Lawrence Has Taught Us.
Posted by Yr Heartout at Wednesday, November 11, 2009