"Somewhere there is tenderness in this town ..." 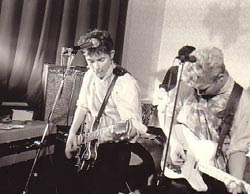 If I had to pick one song that captures a sense of London without specifically mentioning the Capital it would be the June Brides' This Town. Somehow it has always felt like it's caught the spirit of London. That's just the way it's seemed to me. I hate asking songwriters about their words in case precious illusions are shattered in the process. But thankfully the JBs' Phil Wilson has confirmed it is very much a London song. "Beneath the lights on summer nights, it's nothing short of paradise," is about when Phil was young and enraptured with wandering round Soho and the West End. "Only shadows know your name" - you often feel like that in London, adds Phil. At the height of their fame the JBs were based around the Lewisham area, and I saw them play on numerous occasions in the mid '80s at venues such as the Thames Poly in Woolwich and the Old Ambulance Station on the Old Kent Road. Certain lines from This Town would be on my mind as I headed homewards. "Walking home back streets alone, a distant shout chills the bone ..." But nothing can touch you when you're humming a tune this good!