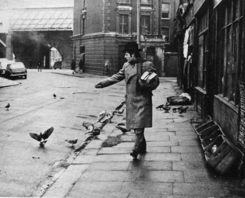 "I'm off to work in the morning. Back home late at night. The landlord gets his money. But the children hardly a bite ..." It's not just Van that's had a hard time of it down and out in W10. Roddy Frame sang about having the Notting Hill Blues, and 20 odd years earlier Ram John Holder had the Notting Hill Eviction Blues, echoing the era of Rachmanism., and the exploitation of West Indian immigrants in the Notting Hill area by unscrupulous landlords. Around the same time Ram John put in an appearance in John Boorman's Leo The Last, which told the story of a European aristocratic ornithologist who inherits a mansion in a deprived part of Notting Hill and watches his neighbours through a telescope. The great Marcello Mastroianni took the lead role in this experimental work which criminally doesn't seem to be generally available. A while later Ram John appeared in Horace Ove's Pressure, a pioneering work of Black British cinema, again set in the Notting Hill area. This is available on DVD, and a taster appears on YouTube ...