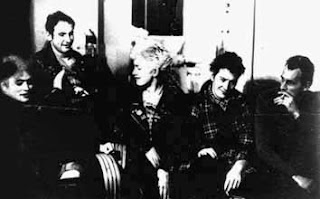 “Life in Brixton, feel the heat. Too much trouble on the streets. But I'm not gonna leave. If I go anywhere else, I've got nothing to achieve. A Kentucky Fried Chicken and a few chip shops. There's quite a few punks and too many cops ...” The Straps’ Brixton puts the punks’ perspective on the area’s history. In the late ‘70s and early ‘80s there was a significant punk presence, living in squats in the Brixton area. Among them would be the people who made up The Straps at various times. Historically well connected (associates include Liz Hurley, Lee Evans, Sadie Frost and Jim Walker) but very much part of the punk underground. There was something of a siege mentality to the punk community of that time. A bit of a ‘no one likes us and we don’t care’ outlook, as captured in a promo film, Punk Can Take It, Julian Temple made for the UK Subs in ’79 which parodied London Can Take It!, a 1940 blitz propaganda short film directed by the fascinating figure Humphrey Jennings, one of the founders of the Mass Observation movement.