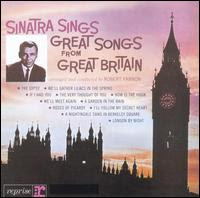 "Down by the Thames, lights that sparkle like gems seem to wink at each girl and her beau ..." Another suggestion with a Thames reference was Frank Sinatra singing London By Night. Somewhat appropriately it came from Rob Simmons of The Fallen Leaves and once of Subway Sect. I say appropriately as it was the Sect's frequent mentions of Frank that sent me rummaging through my mum's records, thus beginning a long love affair with the artistry of Sinatra. London By Night came from Frank's 1958 set, Come Fly With Me, his first work with Billy May, and much to our approval it's a themed LP. The song itself, London By Night, was written by Carroll Coates, about whom I know shamefully little. Frank recorded the song again on his 1962 LP, Sinatra sings Great Songs From Great Britain, which may be the only record he made outside the US. Among Carroll Coates' other credits is Sunday In New York, one for our American comrades to feature. Frank of course was passionate about his USA which is just one reason he applauds so madly at the end of this astonishing Patti Labelle rendition of The House I Live In. Frank himself made a public service film of the same name, and in case anyone still wonders why he is considered to be so cool ...