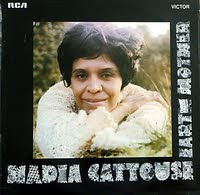 "It's night time in Bermondsey. The tide is turning now on barges in Bermondsey. The waters laps their bows. And on London Bridge young lovers shiver and gaze at the lamplight in the river ..." sings Nadia Cattouse in Bermondsey. Well, actually she's singing it at the Edinburgh Festival in 1969 for a recording that appeared on her Earth Mother LP. Maybe like me you first came across Nadia's name on The Numero Group's Belize City Boil Up compilation, where it mentions her moving to England and becoming part of the folk scene. Well, Earth Mother is a beautiful record that emerged from that milieu. Songwriting credits include Andy Roberts, Mike Evans, Donald Swann, Sydney Carter, Bob Dylan and Nadia herself. Mysteriously Bermondsey is credited to Unknown, which is fascinating as the local colour is an absolute joy (St Saviour's, Guy's, Southwark Cathedral, barrow boys etc.). Does anyone know any more?
Posted by Yr Heartout at Monday, November 16, 2009