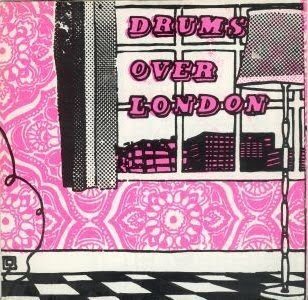 "The natives are restless. They're brandishing their Spear & Jacksons. Their primitive chants thinly disguised as national anthems. Things are getting slightly less than British in the towns. Soon it will be time to stop the rot. We've got to put our foot down ..." sings a one-time MOJO editor on the Disco Zombies' Drums Over London. Caused a bit of a controversy this track at the end of the '70s, if I remember rightly. Being sung from the perspective of a racist, conservative, little Englander the number was open to misrepresentation, and the subtlety was lost on some. The Disco Zombies were called on to explain themselves to some of the fanzines of the day. This Disco Zombies single was released on their own South Circular label, which was a great south London name. The South Circular being one of the great London roads running from Woolwich in the east out to Gunnersbury-ish in the west. Together with the North Circular it forms a sort of inner London Orbital. There was a mod fanzine called South Circular around the same time, I seem to recall, which made a case for The Teardrop Explodes' Treason and the 'mutant pop' Dave McCullough was writing about in Sounds. That single, of course, came out on Zoo Records. One of the Zoo keepers was Dave Balfe, who would later start the rather less appetising Food Records where later one of his partners would be an Disco Zombie. The Messthetically inclined will find more to investigate Disco Zombies-wise on #107 ...