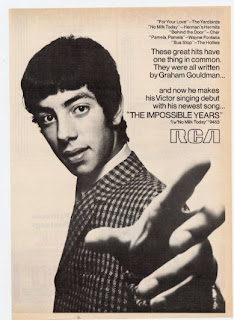 "See the country vicars and the city slickers, pearly kings and noble dukes. Everybody moving, everybody grooving. They've all got The London Look ..." sings Peter Noone in the chorus of the Herman's Hermits number The London Look. This was a 1968 track recorded for a Yardleys cosmetics promotion, written by Graham Gouldman. One of our great songwriters, Gouldman is associated with Kennedy Street Enterprises, the Manchester based songwriting stable, but The London Look was by no means the only song related to the Capital he penned. On his own debut LP, The Graham Gouldman Thing, he had the number Chestnut where he claimed: "If all of us were doomed to die when we'd lived a minute I think I know what Ann and I would wish to happen in it. We'd let our sixty seconds run where chestnut blossoms harden some early morning in Kensington when Spring is in the garden ..." Graham of course wrote hits for top '60s acts like the Yardbirds and Hollies. Other less well known but more local acts that covered Graham's songs were Manchester mods St Louis Union who had a single out with Behind The Door on the A-side. Is it true Magazine's Dave Formula was in this outfit?