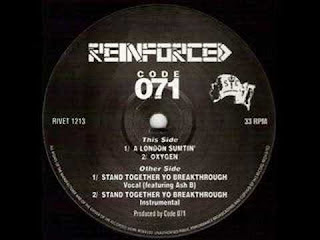 "Just for you London ..." While passing on some kind comments about the project Charlie Weisfeld did gently take us to task: "It seems you've missed some very important tunes. Well they were very important if you spent the late '80s and '90s travelling to warehouse parties in and around London in dilapidated business/industrial parks. These tunes are absolute documents of the time, of rave culture and the birth of Jungle music. They might not have much in the way of lyrics but they bag loads of vibe ..." Charlie had made a very valid point. While on a personal level I may not have been haring around London to events (due to shiftwork and various practical reasons) the music was nevertheless a vital part of daily life. The tracks Charlie refers to were heard via the pirate stations which I would have on all the time, and still in my head I can hear the incessant babble of MCs urging London town to 'old tight and keep it locked. The music itself hasn't dated, and the rush and rattle of the tracks Charlie specifically referred to in his message is still incredibly uplifting. He picked Code 071's A London Sumting Dis on Reinforced, Bodysnatch by Euphony, and Sacred's Do It Together. All Junglists: A London Somet’ing Dis is the title of a documentary made in 1993, directed by Rachel Seely, on the origins of the very underground Jungle scene, and available in three parts on YouTube. And for those interested in some Hardcore Londonism ...