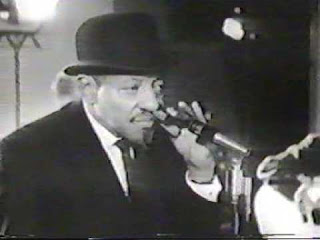 "I put in for my citizenship papers and I'm going back to London for sure because if the good Lord lets me live I'm not going back to the States no more ..." I'm Trying To Make London My Home sings Sonny Boy Williamson with a little help on guitar from Hubert Sumlin on a live 1964 recording. Unfortunately the great bluesman died the following year while back in the States on tour so didn't get to live here full time, despite adopting the trademark two-tone, city gentleman's suit (complete with bowler hat, rolled umbrella and attache case full of harmonicas). The track was recorded on one of the famous American Folk Blues Festival appearances. There is a lovely little book by David Williams called The First Time We Met The Blues which tells the story of young London electric blues fans. Part of the book details a 'pilgrimage' the author made up to Manchester in October 1962 to see the first UK appearance of the Festival. Travelling up in the van with him were Mick Jagger, Brian Jones and Keith Richards, and they would meet David's old school friend Jimmy Page there. Guy Stevens and Dave Godin make great cameo appearances in the book, and there's even a September 1962 pic of the Rolling Stones trio (possibly) in Dave Godin's Bexleyheath home. Val Wilmer's Mama Told Me There'd Be Days Like These gives an alternative insight into growing up as a blues fan in south London and seeing some of the greats performing in the Capital.