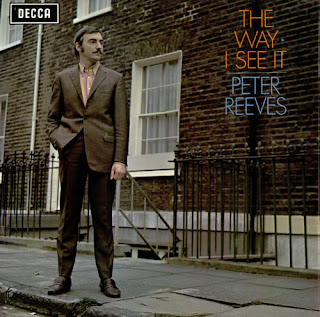 "The night people going home greet me with a yawn. A tramp in a doorway huddles up and mutters ..." sings Peter Reeves on his 1969 single Loneliness of London. It's a song I came across via the Living For Pleasure Alone site where when it was posted I spectacularly failed to seem knowledgeable about the London songbook. I still suspect this was the actor Peter Reeves, a stalwart of the London stage, having a bit of a go at a Richard Harris/Jim Webb thing. If anyone's got a spare £20 or so then why not show how much you've enjoyed this project by treating me to the Peter Reeves LP, The Way I See It? Oh please yourselves. This particular song may have a happy ending, but it's certainly not the only time the words London and lonely have been linked. Ralph McTell and Sam Selvon spring to mind. And then there's Dave Edmunds' London's A Lonely Town, an adaptation of The Tradewinds' NewYork Is A Lonely Town. Was this really a 1976 session featuring Bruce Johnston, Terry Melcher, Gary Usher, and Curt Boettcher? And how did it end up on a Pebbles compilation? Oh well, there'll always be a place in our hearts for Dave Edmunds - for his part in Stardust, his work with the Flamin' Groovies, and of course for his time with Nick Lowe ...