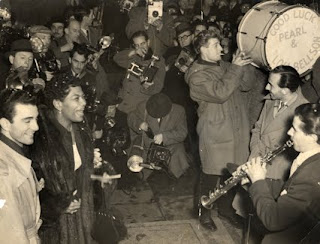 "No one here is sipping tea but me ..." claims Margie Anderson as she sings about the London Blues. Hats off to soul spinner supreme Jo Wallace for suggesting this one be included. And a tip of the hat to the YouTube contributor (wally1435) who has helped bring Margie Anderson's name back into circulation, even if plenty of mystery remains. It seems this track comes from an LP shared with the great Pearl Bailey. Would Pearl have sung about having the London Blues? Well, she married the Italian-American big band jazz drummer extraordinaire and composer Louie Bellson here in 1952 four days after they met, and they remained married until Pearl's death in 1990. They married at the famous Caxton Hall registry office, and Louis recorded his Caxton Hall Swing shortly afterwards in celebration. In 1970 Louie recorded a wonderful concept LP about London, called Louie In London. Predominantly swinging big band sounds, one track (the epic London Suite) features the Mike Sammes Singers. Other tracks include Carnaby Street, Kings Road Boogaloo, Sketches From National Gallery and the gorgeous Proud Thames.
Posted by Yr Heartout at Monday, June 14, 2010