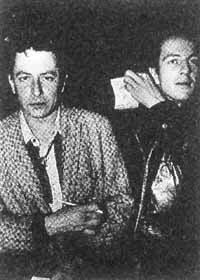 "Well, when you're down on your luck,and you ain't got a buck, in London you're a goner. Even London Bridge has fallen down, and moved to Arizona. Now I know why. And I'll substantiate the rumor that the English sense of humor is drier than the Texas sand. You can put up your dukes, and you can bet your boots, that I'm leavin' just as fast as I can ... " I first heard the song London Homesick Blues via David Pajo's Papa M project at the end of the '90s. Pajo's progress through that decade is quite fascinating, playing with Slint then Tortoise (and it's easy to forget now just how remarkable those groups sonded at that time, with that Ry Cooder/Paris Texas thing going on etc.) then doing his own electronica/folk/country thing with his Aerial M/Papa M personas. I have to confess I've not kept up with his work since. The song itself was written by Texas troubadour Gary P Nunn, who was working with Jerry Jeff Walker's band. I was just thinking how an interest in Texas troubadours was stimulated by The Clash and their support for Joe Ely. The astute among you will at this point mention that, of course, Joe Ely and London Bridge get a mention in The Clash's lovely If Music Could Talk, but then what doesn't ...
Posted by Yr Heartout at Wednesday, June 16, 2010