My Love Went To London 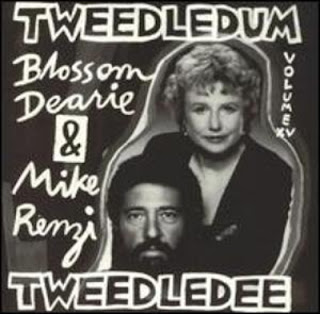 "Never thought I'd live to see the city on the Thames. Where's that sky of grey? Where's that foggy day? The Gershwins have their say. But now I'm here to tell you ..." My Love Went To London sings the great Blossom Dearie on a song from Tweedledum and Tweedledee, an LP she made with Mike Renzi some 20 odd years after she'd sung about liking London in the rain. Lyrics for this song were written by New York cabaret favourite John Wallowitch, whose 1964 debut LP had a sleeve designed by one Andy Warhol apparently. Tony Bennett and Shirley Bassey are among others who have recorded this song. The wonderful Blossom had spent quite a bit of time in London in the '60s. She'd spent time too in Paris in the '50s where she'd directed the pioneering Blue Stars of France with their hip vocalese arrangements which paved the way for Les Double Six and Swingle Singers. And as for Americans heading for London ... well, on his lovely track When Americans Come To London Ed Harcourt took a bit of a let's not be beastly to the Yanks stance ...
Posted by Yr Heartout at Tuesday, June 01, 2010