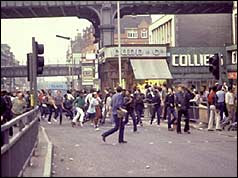 "The youth them in a Brixton they say they win a good fight ..." declares Prince Hammer on Brixton Trial & Crosses, a Rod Taylor track. There remain different views on what was behind the riots of April 1981. Was it a racial fight? Or something more, blacks and whites together, an anti-state uprising, as commentators like Linton Kwesi Johnson have claimed? Lord Scarman led an enquiry, and came up with the blindingly obvious conclusions that young black people in the area were angry about heavy-handed policing, were disadvantaged economically, were to put it bluntly discriminated against. The riots were also mentioned in the track Brixton Incident by Roy Rankin and Raymond Naptali on the reggae independent KG Imperial.