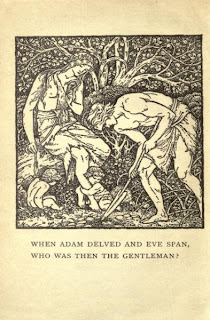 "When Adam delved and Eve span, who was then the gentleman? From the beginning all men by nature were created alike, and our bondage or servitude came in by the unjust oppression of naughty men. For if God would have had any bondmen from the beginning, he would have appointed who should be bond, and who free. And therefore I exhort you to consider that now the time is come, appointed to us by God, in which ye may ( if ye will ) cast off the yoke of bondage, and recover liberty." Thus went the speech of radical cleric John Ball on 12 June 1381 as he addressed the thousands of rebels who had risen against the poll tax of the day, and had marched up from Kent, and were camped at Blackheath before marching on to London to storm the prisons and the Tower of London. Among the leaders of the Peasants' Revolt was Wat Tyler, who after meeting with the King at Mile End was struck down by the then Lord Mayor of London. He is celebrated in this brilliant song by Fairport Convention, which dates from the mid '80s I believe.