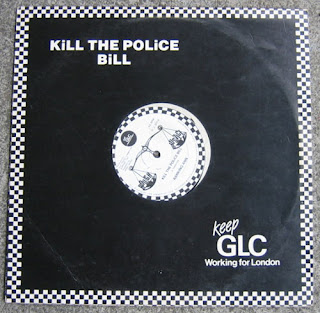 "Me have to tell you about the stop and search. It happened one day me a come from work. A huff and a puff in a the evening rush. I went to me bus down at the terminus. And when I make a move me jump on the bus me hear a car screech and it create some dust. Me see some police which me never did trust. They jump round me and pull me off the bus. People flashing badge and bawl out sus ..." Ranking Ann's Kill The Police Bill was a remarkable 12" recorded as a protest against a proposed Police Bill introduced by the Thatcher administration after it was re-elected in 1983. The Bill was intended to extend police powers, which was seen as provocative at a time of considerable civil unrest amid widespread concern about stop and search policies. The 12" was 'produced' by the GLC Police Committee Support Unit, which was a monitoring body chaired by Paul Boateng. In the traditional sense the track was more likely produced by The Mad Professor, but it was certainly funded by the GLC as part of its opposition to the new legislation. That's GLC as in the Greater London Council, run by Ken Livingstone, and a real source of irritation to the Thatcher regime, being delibrately inflammatory right under her nose. Thatcher's response was to abolish the GLC. Kill The Police Bill and its dub are available on the CD reissue of Ranking Ann's A Slice of English Toast. No home should be without a copy.