The Ghosts of Cable Street 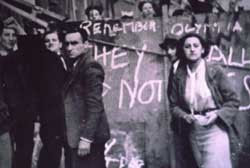 "So listen to the sound of marching feet. And the voices of the ghosts of Cable Street. Fists and stones and batons and the gun. With courage we shall beat those blackshirts down ..." Most of the songs featured in this project are about a sense of place. But what about a sense of occasion? Can the history of London be told in song? Well, try this. On Sunday 4 October 1936 the East End of London united against the threat of British Fascism, and stood up against Oswald Mosley and his Blackshirts. The Men They Couldn't Hang's magnificent Ghosts of Cable Street celebrates this popular resistance. Writings by Joe Jacobs and Arnold Wesker give more details, and it's a story that needs repeating in these troubled times. Mosley himself tried to stir things up again in the East End almost 30 years later, but was rightly seen off again. They shall not pass!