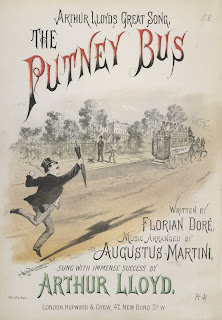 It's not all plain sailing y'know. Our intrepid sleuths are out there tracking down London songs for you, following up clues, but just occasionally there's a bit of a dead end. We got very excited about there being a song called The Putney Bus, made famous in its time by music hall entertainer Arthur Lloyd. We found an image of the sheet music, ascertained that it tells the tale of Arthur walking home from the city and spotting a pretty girl. He follows her but is dismayed when he loses her after she gets on a bus to Putney. He chases her in a cab and when he catches up with her discovers, in true music hall fashion, that the pretty girl is actually his wife. Great stuff. But can we find a recorded version of this song? Can we heck! So we'll have to console ourselves with a song by a great entertainer, educated in Putney, and who drove buses for a living before being 'discovered'. This is a very atypical Matt Monro moment but a rather wonderful one, and a very London one. It also makes me think of a story I read about Matt and the Pretty Things hanging out on the Isle of Wight.