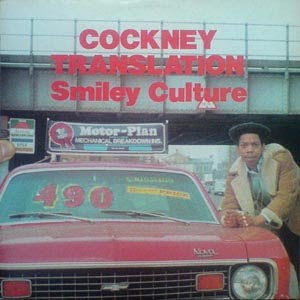 "One say: 'Shall we put him in the van or in the back of the Rover?' Me say: You can't do that ca' me name Smiley Culture. 'You what? Did you do that record Cockney Translator?' In the reggae charts number one was its number. 'My kids love it and so does my mother! Tell you what I'll do . A favour for a favour. Just sign your autograph on this piece of paper' Me cut him short and me just draw out me Parker. 'Pon the producer me just sign Smiley Culture. Them never lie. Them never bother..... arrest me or take me ganja!" The Battersea and Clapham areas have quite a history when it comes to reggae. The Dub Vendor shop on Lavender Hill is a bit of an institution. And once upon a time it had a studio in its basement where many cuts were recorded for the associated Fashion Records, the UK reggae label that has already featured a few times in this project. At the end of '84 into '85 Fashion had a massive hit in a way independent labels like Creation could only dream of. Local lad Smiley Culture's Police Officer almost made it into the Top 10 which was all the more extraordinary as it dealt with a scenario where young black man gets pulled over and searched by the local constabulary. As befits the style of the young London MCs of the time the track has a twist and a lot of humour. And as the video cuts off before the punchline it's worth checking out this version.