"Day's begun and people rush. Off to work by foot and bus. Open eyes and open mind. Conditioned to the daily grind ..." Manfred Mann's theme to Up The 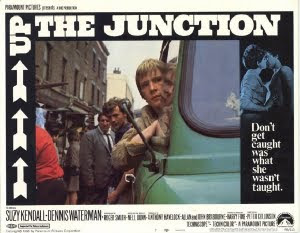 Junction, written by the godlike Mike Hugg, is a great way to start a great film. Dennis Waterman and Suzy Kendall and several other great British names star in the adaptation of Nell Dunn's novel. "You're the only beautiful thing around 'ere princess ..." There was a few years earlier a Nell Dunn adaptation of Up The Junction broadcast on TV as a play. Directed by Ken Loach. And bless the person who has posted ten minutes of this on YouTube complete with some appropriate comments from Edward Ball. Grittier and artier. And ironically Paul Jones is singing on the theme for that.