Keep a little Marc in your heart! 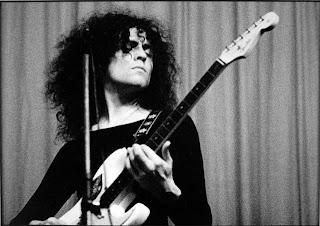 "Mighty mean mod king. Dressed like fame. London to Brighton and then back again ... Changing life's patterns to get to the top. But when you get up there you don't know if you're there or what ..." On 16 September 1977 Marc Bolan was killed in a car accident on Queen's Ride, in the Barnes/Richmond area of London. His beautiful wife Gloria Jones was driving at the time. Marc was rightly stepping back into the limelight with his own TV series, which I vividly remember rushing home from school to watch religiously. The final show, which was aired after Marc's death, would feature Generation X, the Rods, and David Bowie performing Heroes before a duet between Marc and David as the closing credits rolled. Today it seems appropriate that The London Nobody Sings ... and our New York colleagues remember a very special person ...