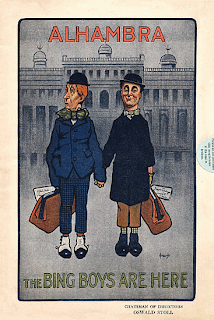 "I'm on my way home to dear old Shepherd's Bush. That's the spot where I was born ..." sings Nat D Ayer in a number from the smash hit WW1 revue The Bing Boys Are Here. Actually Nat was born in Boston, and came to London riding high on the success of Oh! You Beautiful Doll, which he had a hand in writing. The Bing Boys was a major success in the West End, and one of its songs If You Were The Only Girl In The World is still popular today. In Dear Old Shepherd's Bush Nat works in mentions of Ealing, Woking, Tooting and Acton and the various forms of transportation. The Shepherd's Bush tube also gets a mention in Wait A Minute, a Cockney music hall gem from Tom Woottwell in which he lists a series of unfortunate scrapes he's got himself into, including insurance fraud. There are other Woottwell treats out there, including I Ought To Be Punished where a copper's come a cropper and Tom admits he's at fault for using his fist and being a brute ... when he oughtta have used his boot.
Posted by Yr Heartout at Saturday, December 19, 2009