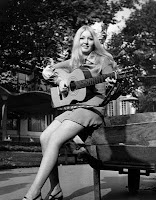 "Suddenly the rain came flurrying, sending the two of them scurrying, helter skelter for the shelter. And feeling bolder in the big pagoda,he gently enquired her name. And they waited till the sunshine came ..." sings Mary Hopkin in her version of Kew Gardens, a song written by Ralph McTell. Ah both Mary and Ralph are in that enviable/tragic situation of being known for one particular song. Ralph, of course, for THAT most famous of London songs. And Mary for Those Were The Days, naturally. Funny really in these days when TV talent shows loom so large in our lives to recall Mary too was a by-product of that world. So the story goes Twiggy saw her on Opportunity Knocks, got The Beatles interested, with the result Mary got signed to Apple. Paul McCartney remembered a song he'd heard in the folk clubs which he thought would suit her. It had been sung by Gene Raskin, who had adapted an old Russian gypsy melody he'd heard in a film adaptation of a Dostoyevsky novel, adding new words referring to his time on the New York folk scene with the Clancy Brothers etc. The rest is history, with versions of the song being recorded right 'round the world. Mary didn't really play the fame game, though. Good for her, but then again anyone who appeared on the Radiators' Ghostown LP (produced by Mary's husband) is alright with me. Many years later there would be another song by the very great Lady Sovereign called Those Were The Days about growing up in London ...