Moving to the city 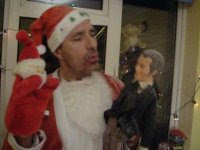 "Well I was tired of being a small minded fish in a smaller minded pond. We're moving to the city where they don't care where you're from ..." sings Simon Rivers in the Bitter Springs' Moving To The City. What can you say? This band has got away with sheer genius for the past 25 years. Until now. Ah but even now I can still recall first hearing the group under its earlier brand name The Last Party when the much missed John Peel played their Mr Hurst. In those days six miles to the local post office seemed a bit extreme rather than the norm. Listening to it now it's jarring to think this was before Sunday shopping became the norm. You can listen to it too on the excellent Last Party comp Cacophony on Port Hampton. Ah Hampton. The Bitters mention Uxbridge Road in The Idiots Computing where mobile phone users get on Simon's wick. So, yes, Hampton. The Last Party/Bitter Springs' manor out west. They've stayed loyal. You get a sense of that too in the 'movie' for the Springs' splendid single And Even Now ("And even now there's something here. That brings me back. That makes me care. With freedom of movement and freedom of speech. Some of us practice what others just preach ..."). There's a French version too with the Springs' partisan comrade Vic Godard singing. What more could you want from life? Well, seeing as how this could appear on Christmas Day ...