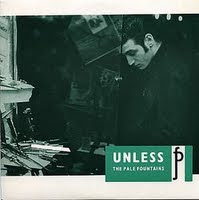 "I'm sittin' in the terrace on the Portobello Road. I'm waitin' for my man to come. It's a complicated situation ..." sings Michael Head at the start of Shack's On The Terrace. There is a nagging memory that looking back at the Michael Head story there is another Portobello Road connection. I seem to recall reading that the 'controversial' photo on the cover of the Pale Fountains' Unless (an image Morrissey would've sold his soul for) was a photo Mick had picked up down Portobello Rd market. I might've made that one up. Dunno. Another Michael Head London song that's been oft suggested for inclusion in this project is London Town from Waterpistol. That sort of thing restores your faith in human nature.
Posted by Yr Heartout at Friday, December 11, 2009