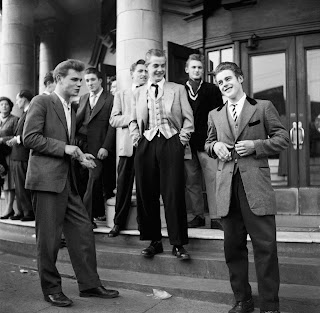 "Every night they walking about in a band attacking woman and man ..." Some enlightened thoughts on apt punishments are shared by Lord Invader in his Teddy Boy Calypso. Bring back the cat o'nine tails! That'll learn 'em. Sadly it wasn't all getting down to Vince Taylor and Terry Dene. And teddy boys did have a bit of a name for getting involved in racist attacks, becoming fascist pawns, and such actions ignited the 1958 race riots in Notting Hill. The following year in the same area Kelso Cochrane, an immigrant from Antigua, was killed by a gang of white men. No one was ever convicted but it was claimed Oswald Mosley's British Union Movement were responsible. Here modern day calypsonian Alexander D. Great pays tribute to Kelso.