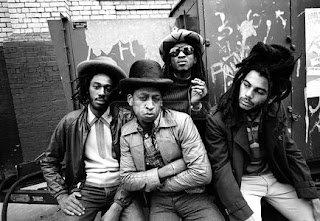 "Three babylon try to make I&I run ..." sings Aswad on Three Babylon, casting a wary eye around their Ladbroke Grove locale. Brinsley Forde's words eerily echo the ending of Babylon, the great Franco Rosso film, where he defiantly chants over the uplifting Aswad track Warrior Charge while the police break down the doors of the dancehall. Aswad unlike a lot of the musicians who took up residence in the W10/W11 areas were really local lads, but they did reach out and interact and the Aswad sound reflects a wide mix of influences in a way others are said to but rarely do. It wasn't just a punky reggae party, either. There was a lot of jazz, funk and all sorts in there. That's the way it should be. For example, the cover of The Face in April 1981 featured Adam Ant, The Beat, Polecats, Gang of Four, Selecter, Delta 5, Lounge Lizards, Aswad, PiL, juju, afrobeat and highlife. Now that's what I call pop music.