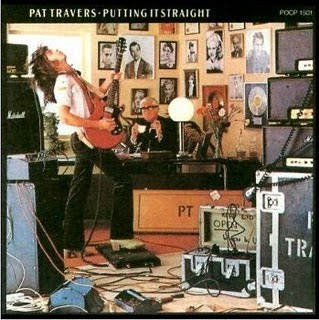 "Life in London is bittersweet. Spray can slogans along the street. Some kind of revolution in the town. Razor blades and safety pins make you look like a clown. What's goin' down is just the same old sound. You know that energy has always been my drug for me. And I came across a lot of water just to see if it could be the place to go, the life for me. I changed my dollars into pounds. And now that drink is gonna cost me 50p. But the District Line just doesn't seem to be running as far as I'd like to go today ..." sings Canadian hard rocker Pat Travers on his 1977 track Life In London. He seems to equate the punk rock explosion with the District Line in that neither goes as far he'd like. Cor! Controversial eh? Pat I remember from tuning in to Nicky Horne's Your Mother Wouldn't Like It rock show on Capital while waiting for Peel to come on. Nicky would play a mixture of new wave and old school rock, and I seem to recall Pat Travers as one of the few of the long hair brigade to rise to the punk challenge by saying I'm as tough and as hard rockin' as you young punks. Interestingly Pat was probably younger than a lot of the punk stars of '77, and maybe a lot more honest. Let's rock!