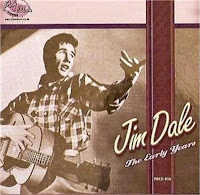 "Just outside the tube station there's a big gate. And of course everyone who goes through that gate gotta pay the man some money. Gotta give him a ticket. 'Course if you have a certain ticket boy you don't have to pay the man anything. Now we see a fella walking through the gate. As he goes through the ticket collector shouts: 'Say fella, fella, you got anything for me?' Fella turns 'round and he shouts back: 'I gotta season' ..." says Jim Dale at the start of his song about the Piccadilly Line. Naturally the fella hasn't got a season ticket at all. So this early British rock 'n' roll number promotes fare dodging. What a carry on! 'Specially when the Piccadilly Line is used by so many tourists to our shores arriving at Heathrow. The Piccadilly Line was Jim's London take on the skiffle standard Rock Island Line. It was produced by George Martin, which is a bit ironic as one of his later '60s productions, Edwards Hand, had roots in another combo called Piccadilly Line. The ever resilient Jim at the end of the '60s contributed to the soundtrack of the film Twinky which featured Susan George using a rather different form of transport ...