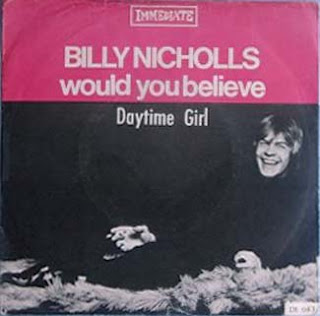 "People raising hands to bid. Taking off the top and seeing what's been hid. Wrapping paper on the ground. Screaming children showing off the things they've found ..." sings Billy Nicholls in his Portobello Road. I think I'm right in saying Billy was actually from the area (well, White City ...) which seems unusual for someone who's written a song about the market. The song comes from his Immediate LP Would You Believe, a record that for all the usual reasons vanished from the radar on its release but gradually acquired a cult following. Now it's rightfully regarded as a classic piece of pop psychedelia with some lovely lush arrangements. It includes another wonderful London song in London Social Degree, which the astute will know the lovely Dana Gillespie did a great cover version of on her fantastic Foolish Seasons set. And here's Billy with a familiar voice in the background ...