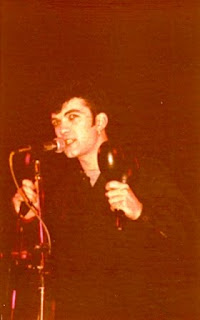 "Take the London Road east out of Watford. The A409 from Bushey Heath. Harrow-on-the-Hill. By pass Wembley. Turn left into the A4005. On to the A40 towards Shepherd's Bush. Then the Bayswater Road ..." One of the great travelogues in the London songbook is She's Expecting You by Department S. The late Vaughan Toulouse enigmatically outlines the route someone should take as they head from the outskirts of north west London to a suite in the Park Lane Hilton. Quite why and what happens next is something to get the imagination working overtime. For a while this was a great lost b-side but Department S' work has been given a new lease of life by salvage experts LTM. There is a case to be made for Department S capturing the spirit of the age at the start of the '80s, evolving from Guns For Hire and the underground scenes of the time (namely the mod and the Billy's/Blitz ones), almost accidently becoming pop stars with Is Vic There? before disappearing. History is at least being kinder ...