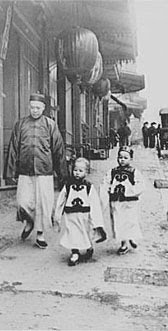 "Oh, Limehouse kid. Oh, oh, Limehouse kid. Goin' the way that the rest of them did. Poor broken blossom. And nobody's child. Carefree and happy. You're just kind of wild ..." A lot of people have sung Limehouse Blues over the years but some correspondents from West Ham strongly suggested that the Mills Brothers' version of the Douglas Furber/Philip Braham number be the one featured here. I had been tempted to go for Nancy Sinatra's, but the guys had a point. The song was originally performed by Gertrude Lawrence and Jack Buchanan in the revue A to Z in 1921. In 1934 the Mills Brothers recorded their immaculate version, tapping into the Limehouse chinatown stereotype propogated by the stories of Fu Manchu, Sherlock Holmes, and Dickens. The Mills Brothers spent quite a bit of time in London in the '30s and this was far from the only song they recorded related to the Capital. Their London Rhythm springs to mind. And who needs to seek solace in an opium den when the Mills Brothers can soothe the savage tumult ...