Pretty Little Villa Down At Barking 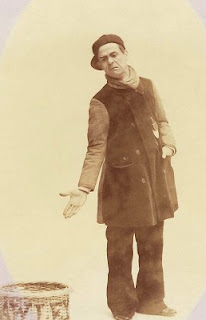 "We ain't a living where we used to live afore we moved away from the little wooden 'ouse in Peckham Rye ..." states Gus Elen at the start of his 1911 number Pretty Little Villa Down At Barking. In the true tradition of the English working classes Gus has moved further out and he's inviting his old pals to come and see the new place and hear the sparrows sing. This gradual migration was the subject of Michael Collins' controversial book The Likes of Us. Gus Elen is certainly peerless when it comes to playing the caustic coster. In his much loved number If It Wasn't For The 'Ouses In Between he sings the famous lines about "Oh! it really is a wery pretty garden. And Chingford to the Eastward could be seen. Wiv a ladder and some glasses you could see to 'Ackney Marshes. If it wasn't for the 'ouses in between ..." The more you explore the work of Gus Elen the more rewarding it is. And certainly the noble Savages and holy Greils missed a trick in failing to finger 'im as one of Rotten's dynasty. It's a great big shame there's not earlier film of Gus in his prime ...